Today was one of those days for me when I realize I've got seemingly nothing in the refrigerator but I'm not nearly in the mood to go to the store (it's rainy and freezing).

Somehow I've always got hummus ingredients on hand so I at least had that going for me...
chick peas, tahini, lemons, salt, garlic

then all I had was carrots, golden raisins, four grape tomatoes, a big piece of romaine lettuce and some slivered almonds. Hmm...

"Well, I could finely chop some carrot and those little tomatoes. Then I could toss in some raisins for sweetness and add some slivered almonds for crunch! THEN I could mix it all up and make it like a lettuce wrap of sorts and top it with my fresh hummus!"

So I did. And I'd do it again any day... don't judge until you try it. It's actually not boring and it's actually so good. The only trouble was that I literally only had one romaine leaf left so, I ended up eating the rest of the filling drizzled with hummus straight out of the bowl, almost like a salad.

(there's one photo of this because honestly, I wasn't expecting a blog post out of my barren fridge) 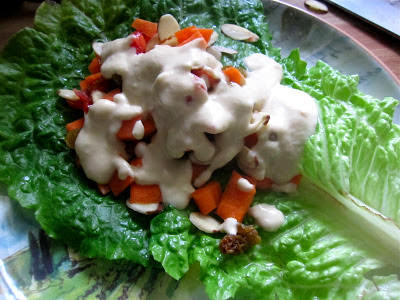 Okay! So whip up some of our homemade hummus. So fast and so easy. Then chop two carrots, and a few tomatoes into small bits... the smaller (or thinner) the better I say. Toss those in a small bowl with a handful of golden raisins and a sprinkling of slivered almonds. You can use regular raisins if that's all you've got on hand but, I really like the mild sweetness of the golden compared to regular... personal preference! Lay out a few romaine leaves, fill with your yummy chopped carrot salad and go to town with that hummus. Wrap it up like a burrito and enjoy!

Some days you've just gotta keep it simple, amen?!
XOX
Posted by sidney at 11:50 AM