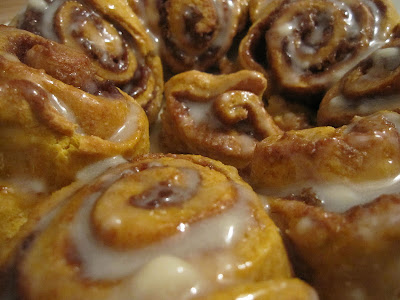 So I've been on this "learn how to use yeast and make awesome dough and bread by learning the science of it" journey for awhile now... it's SO tricky?! There are certain baked goods that are super forgiving in the way of being malleable as far as taste goes... pies, especially fruit and cream, tarts, custards, etc... but bread dough... mercy. It's a different story. Seeing as how most other baking techniques come fairly easy to me, I was thinking this would be a similar venture.. but I've had my hat handed to me in my OWN kitchen by my OWN oven a NUMBER of times now. BUT- I've reasoned with my oven. We've taken our friendship bond to a NEW level. Yeast is slowly but surely teaching me it's dance and we've reached an understanding. I'm still battling a little with soda and powder, but I have a feeling, after the last two baked goods we've created, they're learning to surrender in the best way.

SO- what you need to know is that I made one batch of plain old cinnamon rolls that tasted great, but where the complete wrong consistency and turned hard after like, an hour. And then it all came together... and I got it. And then I added nutmeg and pumpkin and our kitchen was a glorious fall festival. Pumpkin, anyone?


Filling-
Frosting/Glaze- didn't record the recipe for this because everyone's different, so i'll just tell you what you'll want to use
Melt your butter! Pour your half & half in a small cup or bowl and microwave it until it's really warm, but not burnt. Pour the yeast in with the milk and let it stand until foamy... mine took about 7 minutes. 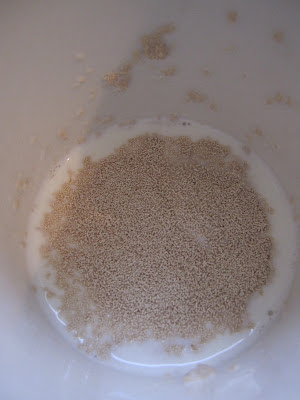 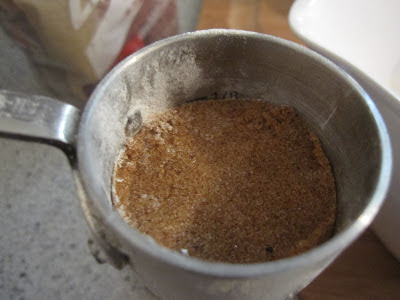 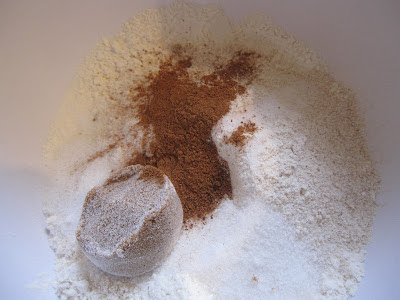 Mix until really well combined. Add 2 Tablespoons of the melted butter to the dry ingredients and mix well with a metal spoon. Once that's combined, add the egg, pumpkin and yeast and milk mixture. Blend with your electric mixer, or better yet standing mixer if you've got one. If you're electric mixer can handle it, beat on low for about 3 minutes. That's what I did since I don't have a standing mixer, but I did have to scrape the beaters down once or twice... just be patient in this step. 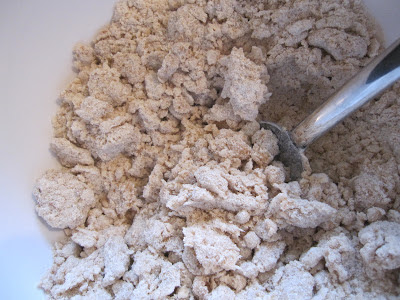 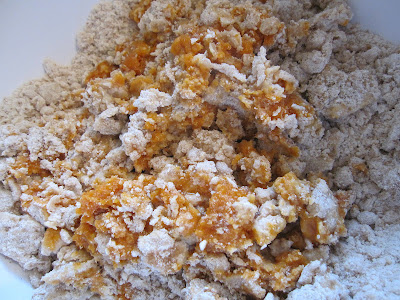 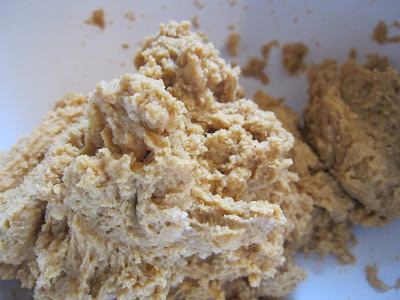 Once it's well blended, run through it with your hands for a few turns and make sure there's no dry ingredients clumped in there. Your dough will be sticky and look like it's ripping apart in certain spots. That's a good sign! Just means the yeast is doin' it's thang. Coat a big bowl with a little olive oil, gather the dough into a big ball, turn it once in the bowl so it's coated with oil on both sides and cover it loosely with plastic wrap. Let it rise and get doubled for about an hour... truth be told though, I could only wait 45 minutes. I stuck mine in the oven (mind you, the oven was OFF) so I wouldn't be tempted to just eat the raw dough. 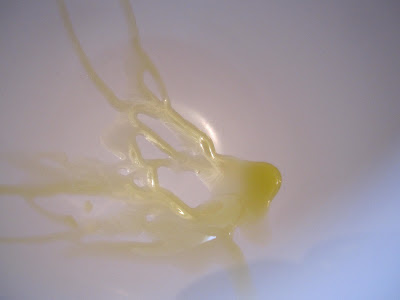 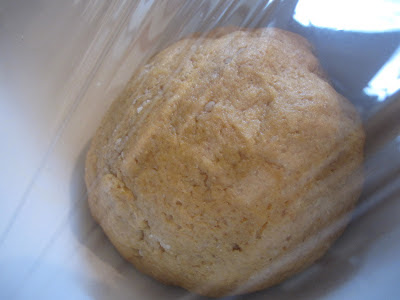 Once it's gotten big and puffy in the bowl, flour a big surface and turn the dough out of the bowl. Lightly flour the top of it and roll it out into a big "rectangle." My rectangles never actually turn out but, that's what you're going for anyways. You'll want it to be about a foot in width and maybe 15-16 inches in length. Spread 2 more Tablespoons of your melted butter over the surface of the flat dough (save the last tablespoon for dripping on top of the filling). 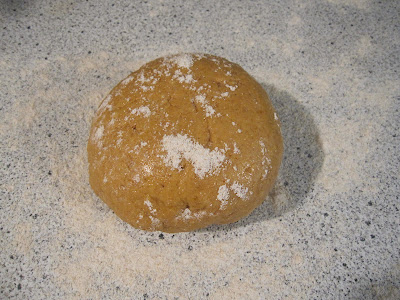 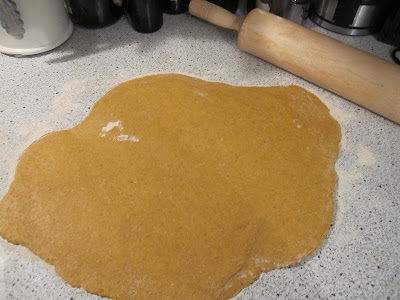 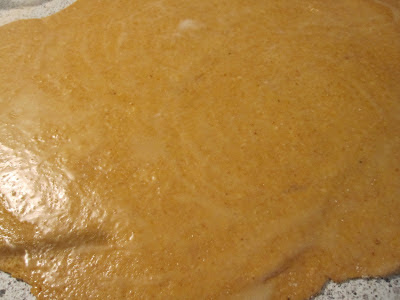 In a small cup or bowl, combine your filling ingredients really well. Mash them all up with a spoon and spread them evenly over the dough. Then drizzle/ spatter the remaining melted butter all over. 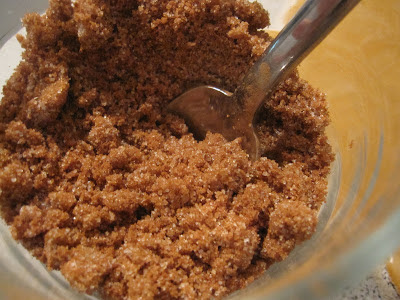 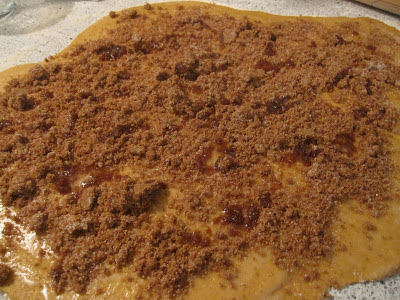 Now, slowly and carefully, tightly roll the dough over itself into a long log, starting from the short side. Slice it with a serrated knife into 8 sections. Lightly butter a round cake pan and arrange the pin wheels in the pan. Cover them with plastic wrap and let rise again for another 30 minutes. (ps- disregard the fact that these photos have me using wax paper... i mistook parchment paper for wax and it was not a pretty sight in the oven... wax paper smokes big time so don't use it. if you don't have parchment paper, it's TOTALLY fine, you don't need it. it just makes it easier to pull the buns out of the pan when they're done but if you wait a few extra minutes, they'll pull out just fine.) 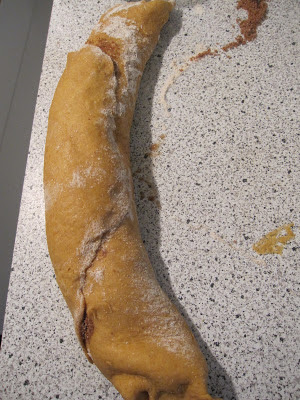 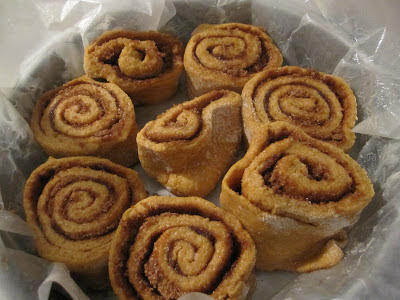 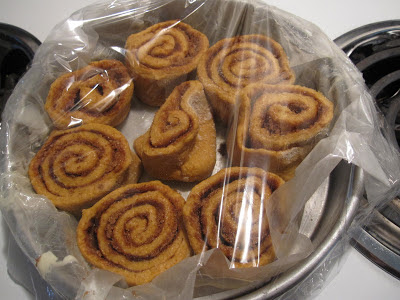 Preheat your oven to 350 degrees. While you're waiting for the wheels to rise, you could make the glaze. Basically, I combined a few different things and beat them REALLY thin and watery so it was more of a light glaze as opposed to frosting. I'm not a frosting gal and I really think the dough speaks for itself so... do what you please! I had a small amount of left over cream cheese frosting from the pumpkin cookies, so I beat that in with this and that and it was awesome. 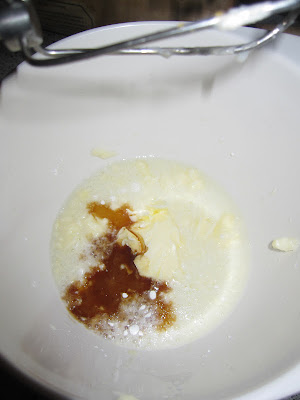 Now remove the plastic wrap and bake your pin wheels for about 25-30 minutes... when you see the filling starting to bubble and the tops get a little golden, they're done. The smell will be intoxicating, so try and force yourself to lay off for a few minutes. They'll be so much easier to remove when you let them cool for a few. 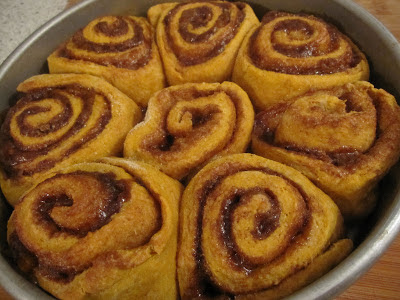 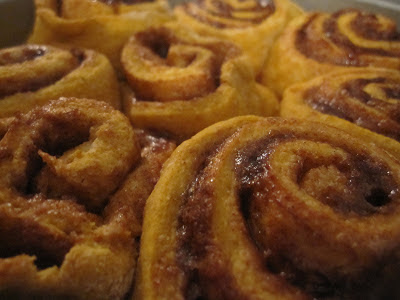 need you to just stare at these for a minute... and this is without glaze. 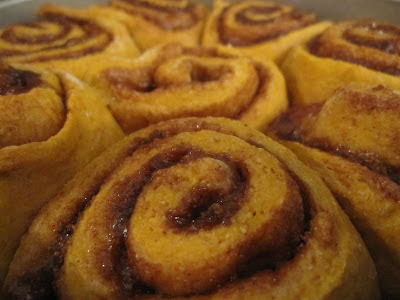 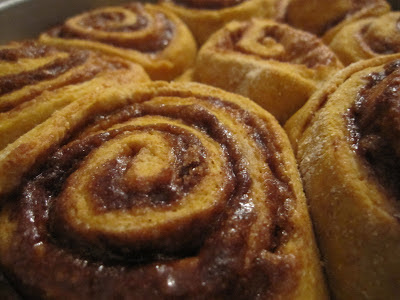 Hear me... I know these aren't exactly the breakfast of champions... but c'mon... you need these in your life at least once. Also, we didn't have them for a brunch or anything, we served them for dessert one night with some whiskey. And for dessert, they're not nearly the most offensive as far as calories and sugar go! So if that's the way you've gotta look at it, please do so and proceed in making these, guilt-free. 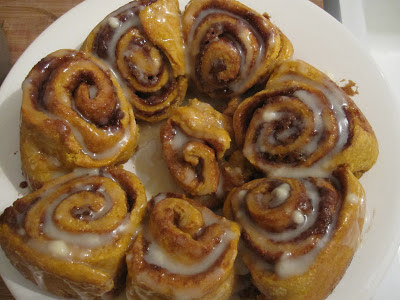 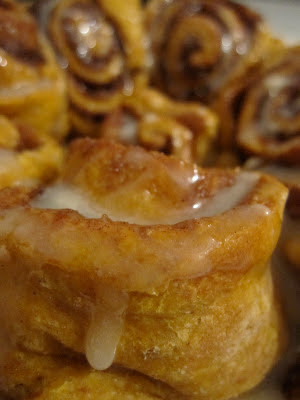 I'm going to continue to let you in on my baking journey... it's super challenging and fun and SO so rewarding. And like I always say, I'm just as much on the learning path as you are, so be encouraged! Get adventurous and get in your kitchen! Can't wait to hear your thoughts on these... also they photograph so well, right? Get your iPhone out, snap a shot when you make them and send it my way! sidney@recitherapy.com 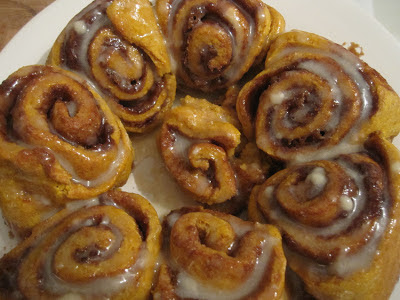 Lots of Pumpkin LOVE to you guys on this grand Monday afternoon!
xox