What we bought, What we made meal #4: Chicken Sandwiches for lunch!


I know, this one is kinda boring... but I'll tell you what, these babies do not TASTE boring. They're delicious and too easy. And they're not half bad for you, either!

Broiled a slice of white cheddar on the buns... make sure to watch these, they burn fast! Then topped them with the leftover avocado hummus pineapple spread and grilled onions from burgers the other night. Slathered some hummus on the bottom bun.


Warmed up some slices of the rotisserie chicken and placed them on the sandwich. Finished them off with fresh tomato slices, romaine lettuce and a little dash of salt, pepper and olive oil. Sliced up a fresh nectarine as a healthy little side. And Voila! 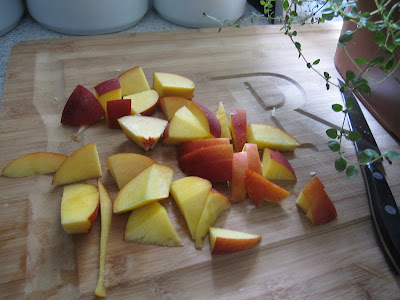 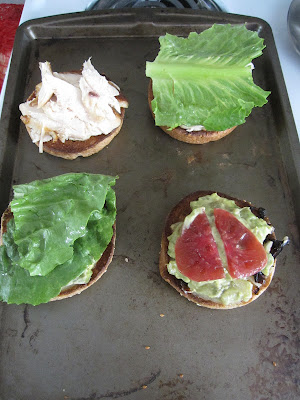 Seeing how easy and great these little dishes have been, anyone have any that they'd like to share?? Let us in on it! :)

In other quick news... it is Friday Fave or Fail day. Today's restaurant. FAIL.

French Roast in New York City. It's a 24 hour joint and it's decor is fun and French and inviting... but the food...? Why is it never consistent and how does everything somehow taste the same? Ever been to one of those restaurants? Also, keeping with those crazy studio hours, often James, Michael and I would be walking home from the studio at 5 a.m. and want breakfast! So we'd stop in, order a coffee, (which was, in fact, decent) and try to order croissants (something light, since we were in fact, going straight to bed afterwards). Without fail, they never actually had croissants ready, even though their menu stated that they would at that hour. Fail. 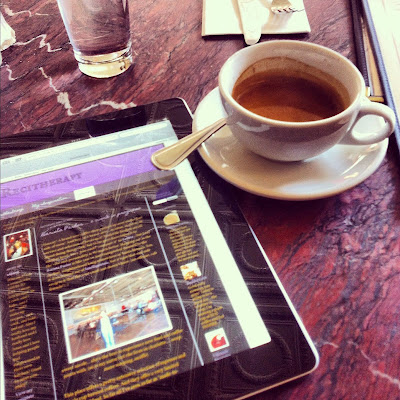 Sometimes Michael and I would order the French Toast (sorry Kalle) and it would come with mounds of glorious strawberries amongst other fruit... and others, we'd get no strawberries. None. And hardly any other fruit but some obviously 'day old' melon. Fail. 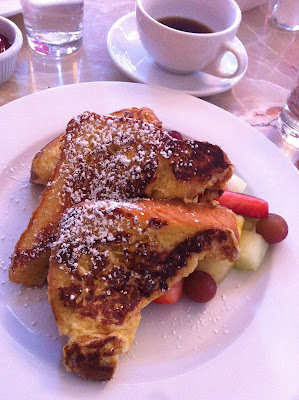 The quiche... (i know, you're wondering at this point why on earth we kept going back and why I have so many examples to share with you... it was literally the only place open all night that was one block from our apartment, so it had to do) the chef made a new quiche everyday so I thought, "hmm... maybe this menu item is going to be more fantastic than anything else I could order since the chef really has to think about it everyday and be creative." Well I was wrong. I ordered the spinach and fontina quiche one day and it was mostly fontina swimming in a pool of butter surrounded by burnt crust. FAIL. It was also served with a side of pathetically limp lettuce doused in some sort of mustard vinaigrette. Big fail. 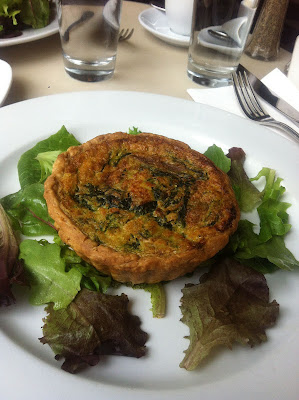 James' face of complete displeasure but smiling for my photo's sake. :) 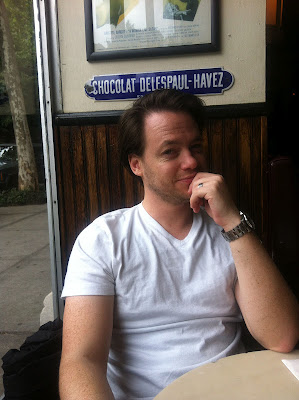 And the croque monsieur... it was BEAUTIFUL! Looked perfect! The top was perfect. And then I sliced into it. The ham was cold and lifeless and the bottom toast had NOTHING going for it, other than the fact that it's shamefulness was masked by the even more shameful ham. FAIL. 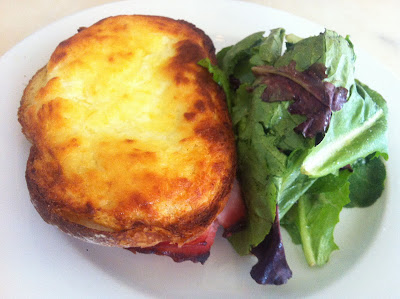 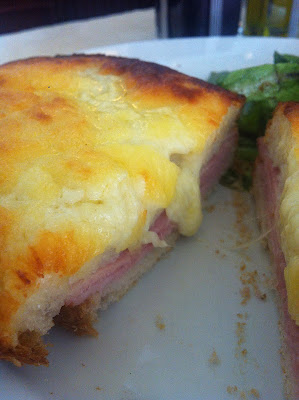 I'm so sorry French Roast, but I hope I never have to visit you again... and dear friends, as much as it may entice you from the outside, because it is pretty darn cute, don't do it. Save your money and keep walking elsewhere.

Email ThisBlogThis!Share to TwitterShare to FacebookShare to Pinterest
Labels: budget, chicken sandwiches, easy lunch, nectarines, rotisserie chicken, what we bought, what we made