Barista Parlor ... a work in progress

Hooray! A brand new coffee shop opened up over on the East side of town! And boy, is it brand new... in ideas, in decor, in service and selection of beverages! Nashville foodies are all about doing things well, but these guys have taken it to another level. Sure, you could "compare it" to Crema... but I say the vibe and personality is SO much better. Hanging out in the Barista Parlor is like you've just transported yourself to the coolest, neighborhood hang somewhere in Santa Monica. Yes, it does remind me of Intelligentsia, but it's got that east side swag to it that the west coast just doesn't have. (no offense, cali friends!) ;) 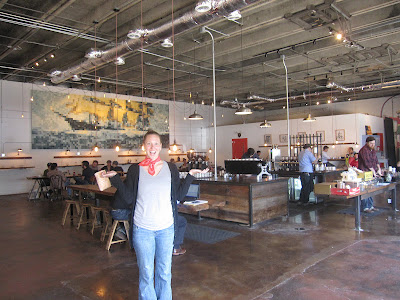 sweet nicole... she's the best to experience new food and coffee joints with. (so is my sister but she lives in charlotte.... weep.. more weeping, sniffle)

This place offers a pretty extensive selection of espresso and single cup brewed coffees. And they offer a very limited selection of food. So far all I've seen as far as "made-to-order"goes is pop's waffles, (which are really good, but don't compare to Frothy's in Nicole's opinion) homemade cinnamon rolls with espresso cream cheese glaze and Porter Road Butcher's sausage and scratch-made biscuit. I won't lie... the smell of the biscuit was so intoxicating, I ordered one. So did Nicole. We both got sick. NOT a win, Barista Parlor. Enough said. 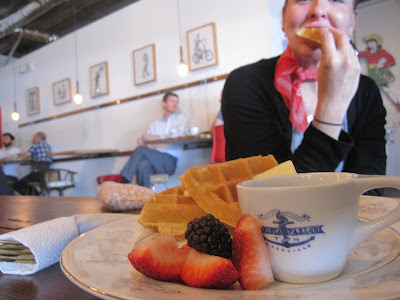 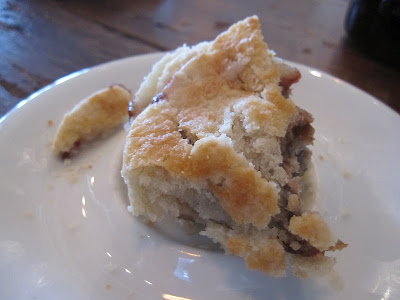 Nicole and I have been twice now. The first time, I had two espressos. One was an Intelligentsia La Tortuga, which never disappoints, in my opinion. Second I had an Owl's Howl. It was good! Standard, and nothing that left really a lasting impression, but it was drinkable and tasty. Just what I needed. 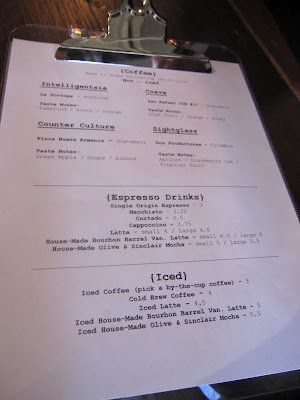 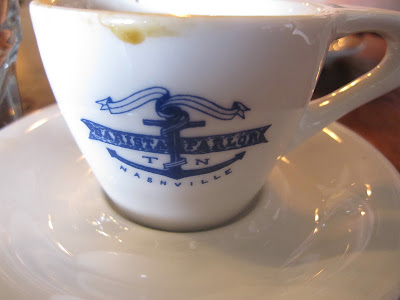 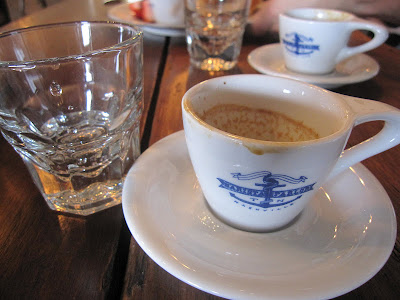 Nicole had a latte... she fell in love. It was delicious, I tasted it, too. 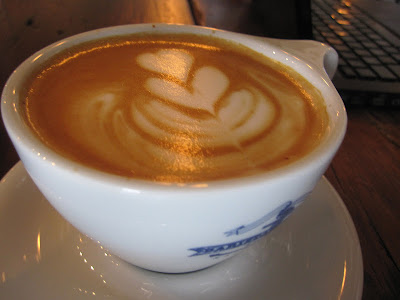 So our first experience was great! We were happy campers with great coffee and a lot of eye candy to check out for the first time. The decor of the place is all handcrafted long bar tables made out of exposed, old wood, lacquered up and riveted with standard steel hardware. Very cozy actually! And the barista's stand is right in the middle of the joint, so from any vantage point, you've got a slew of things to look at, from barista's pulling shots, the chemex coffee drippers doin' their thing, to watching the cold coffee process brew through three feet of glass bowl contraptions. It's pretty fascinating to watch, and a good "mindless distraction" to watch in the midst of blogging, e-mailing, skype meeting, etc. 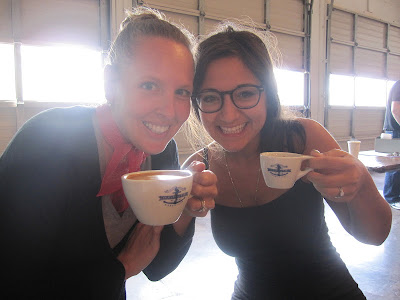 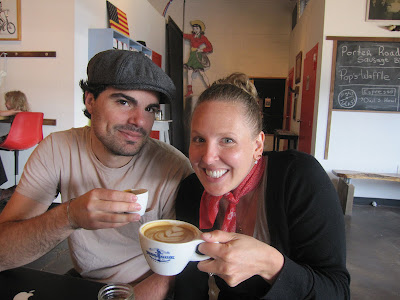 The second experience wasn't as great... I ordered a regular brew coffee... the San Rafael to be exact. It took about eight minutes to get to me, and when I saw it, smelled it and then tasted it, I swear it was tea. (okay, it wasn't, but it might as well have been) Too weak, and not punchy at all. Not what I was looking for in a personally brewed cup of coffee. But it was served cool in it's own little decanter! I liked that. The little things, man... they make it. This was also the time we ordered those biscuits. After it took about 12 minutes to get them, (granted they did warn us it would be about ten minutes due to running out of sausage and having to cook up some more) we were both feeling sick immediately following. WAY too greasy. Actually can't write anymore about it because the thought is making me ill. 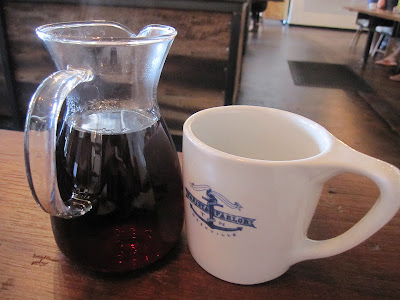 But I WILL say this... the staff COULD NOT BE NICER OR MORE ACCOMMODATING. And they're as straight forward as straight forward could be. If you're expecting an immediate, "to-go" type experience, they'll let you know straight away that you're not going to get that kind of experience there. If you're looking for soy milk, sorry, they'll let you know right away that they only use full cream milk. (legit!) They are who they are and that's not gonna change, but they want their guests to feel at home and to know exactly what they're getting ready to experience. And I appreciate that. So Barista Parlor, well done!  I like you, and I like you a lot. You've got some work to do and some kinks to work out, but who doesn't after only 3 weeks! Heck, who doesn't after 3 years! You guys are champions and you've got people that believe in you and what you're doing! Thank you for reminding people and awakening people to what a true, beautiful coffee "experience" really is.

Cheers to a good cuppa!
xox
Posted by sidney at 3:47 PM