Forever and ever ago, my sister Jordan sent me a recipe for something she wanted me to make for her. (anything that involves gritty grainy ingredients and lots of mixing, she stays away from) It was a raw tartlet base with fresh berries and heavy cream as the filling. They looked to DIE for and for whatever reason, I never made them. Well, I just recently went haywire grocery shopping and ended up with a 2lb block of gorgonzola cheese and an 8lb bag of pears. The first thing that came to mind was making a pear and gorgonzola tartlet! Then conveniently enough, Pinterest sparked my tart loving thoughts again with another woman's recipe posted right on my board. So I thought, "hmm.. maybe I can make a version of that thing jordan sent me..?" So I rummaged for a minute in the pantry and found a bag of almond meal, some raw cashews and some coconut.. perfect! All I needed was something to keep it all stick together and something sweet... agave and golden raisins! I headed to Trader Joe's and stocked up. Vitamix and I spent the afternoon together making these babies... okay not the afternoon, but awhile. These things are definitely a labor of love, but worth it in my humble opinion. Here's what I'll say before we dive in though... I loved them the way I made them, but they'd be KILLER, way better, so much more sumptuous if instead of pears and apples, you used fresh berries or peaches. I just didn't have either of those things so I worked with my supplies on hand. I encourage you to play around with the toppings!

For the tart base you'll need: 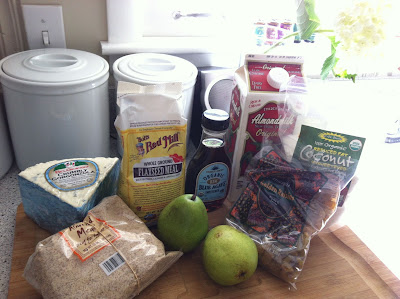 Rule #1 before starting a new adventure in your kitchen: get yourself some fresh flowers and stick them in plain view. They make everything better. 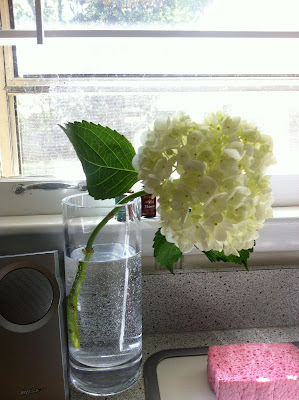 Combine all your ingredients into your Vitamix or food processor and blend until mealy and able to stick together between your fingers when pressed. 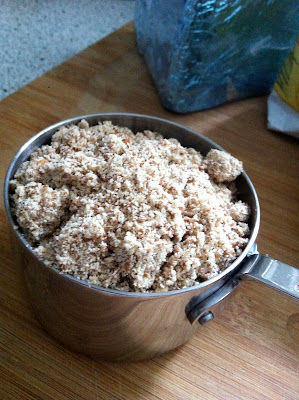 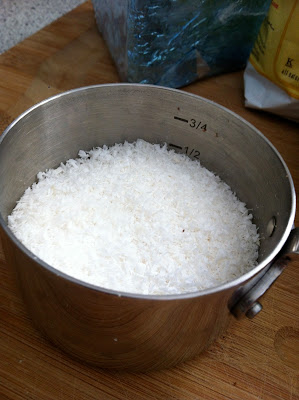 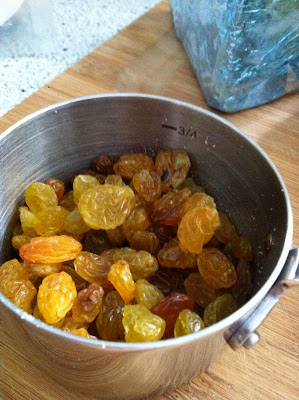 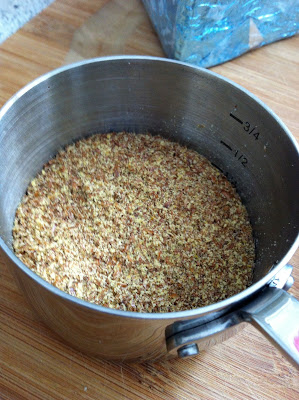 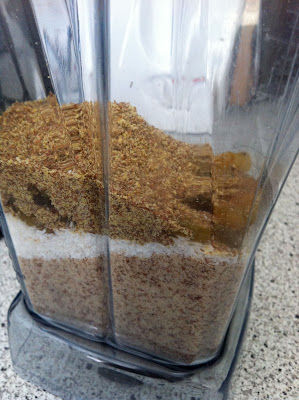 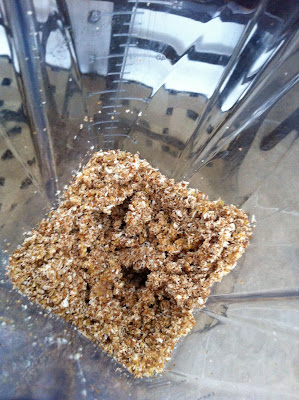 Now, here's where I had an issue. Yeah, I'm a food blogger and I'm a baker and blah blah blah... but I don't OWN tartlet pans. I've NEVER owned tart pans... you know the ones with the removable bottoms to make your life so much easier? Well, I don't have them. (don't even know why I call myself a baker. fail.) Anyways, so I had to experiment with sizes of pans lined with foil and baking cups that I could remove after the fact. IT WORKED, don't get me wrong, but if you HAVE tart pans, big or small, use those.
Option #1: large ramekin.
Line your little pan of choice with foil (only if you are using something other than an actual tart pan) and press a good amount of your mealy tart base into the bottom and on the sides... try to make it decent looking.. remember, the foil is going to be torn off so just the tart is exposed. 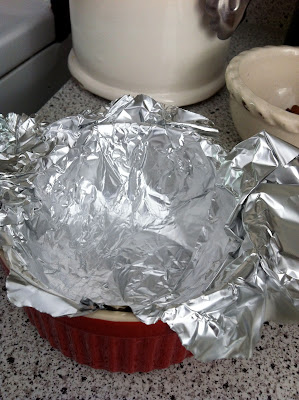 so embarrassed that I even posted this photo. i look like a total amateur. but everyone has ugly projects in the kitchen right? 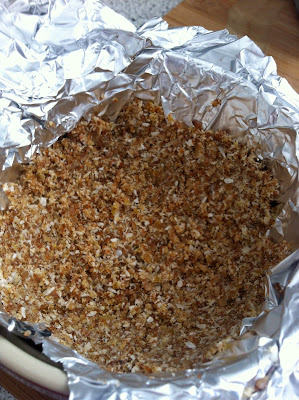 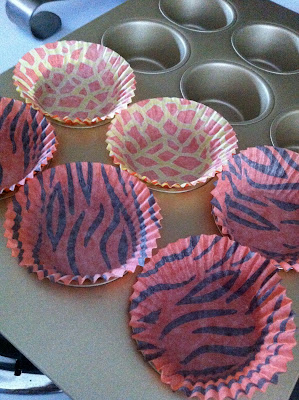 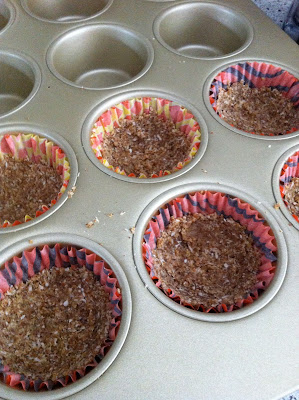 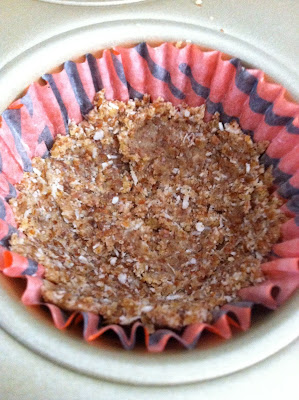 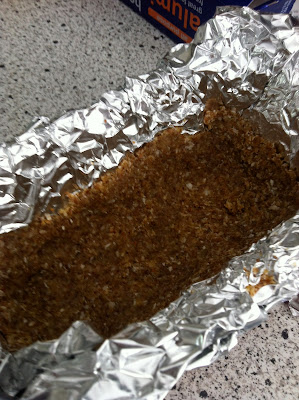 When you've filled your tart pans with the base, stick them in the freezer for about an hour and a half. These are no bake, raw. Just frozen, that's how they're gonna stick together enough to put filling and goodies on top. The longer you can stand it to freeze them, the better. Now let's make the filling. Wash out your Vitamix 'cause you're gonna use it again right now.
Throw in your coconut, your soaked cashews (they should have been soaking the whole time you were making the base), agave, water, 1/4 cup almond milk, vanilla extract and salt. Blend it until mostly smooth. It'll start to go a little slow at this point and it should still look a little chunky. Now's the time to add in the extra splash of almond milk and the oil. Blend until smooth. It'll look like hummus. :) That's always a good thing. 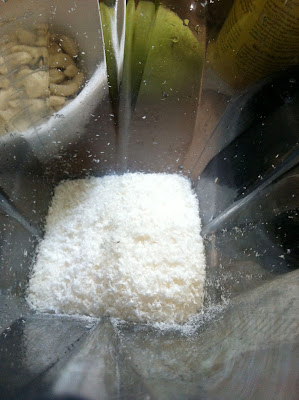 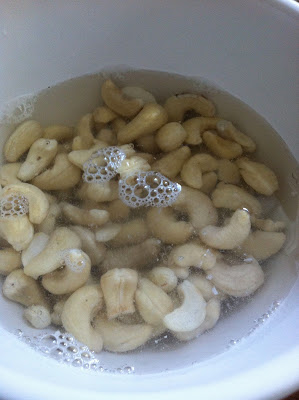 Get the cashews out of the hot water with a slotted spoon. Don't throw them in with all that water. 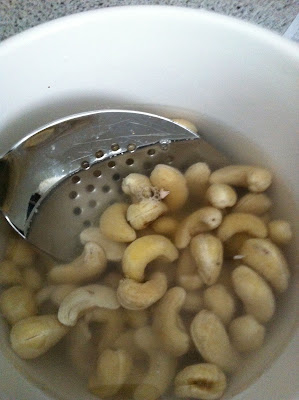 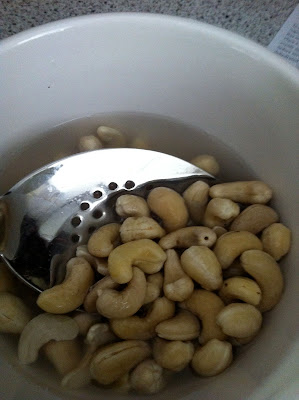 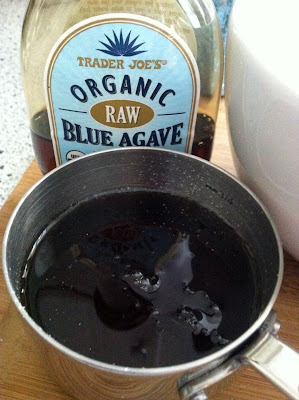 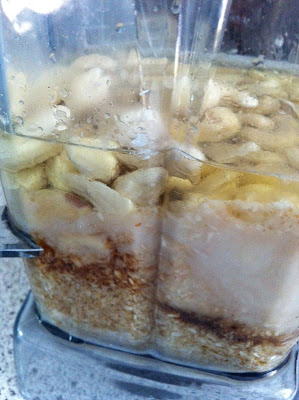 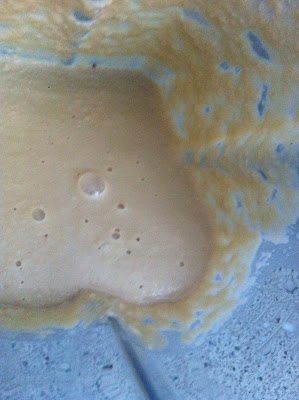 Now put this in the fridge to get cool. It'll be a little warm from all the blending. The good thing about these tartlets is that you can prep them right before you serve them. They're just so easy. And they're best chilled. Now for the topping!
THINLY and carefully slice one pear and one granny smith apple, or something else tart. Get out a baking sheet and squeeze on the juice from half a lemon. Lay the fruit slivers on the baking sheet and squeeze on the juice of the other half of lemon. If you don't care about these things being raw, you can soften the pears and apples by sticking them in a 275 degree oven for about 10 minutes. But I prefer them the way the are. 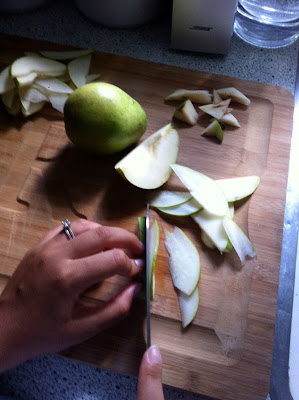 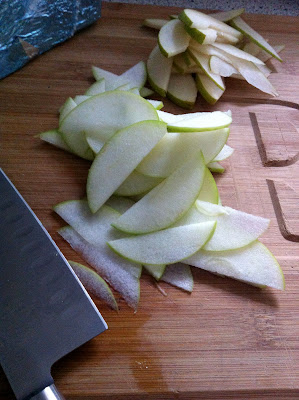 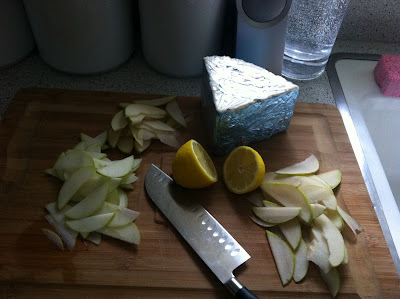 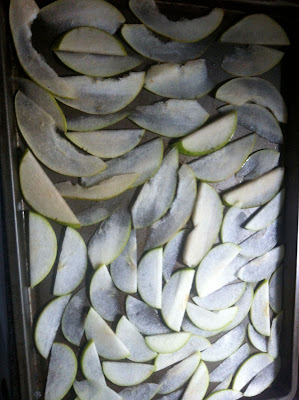 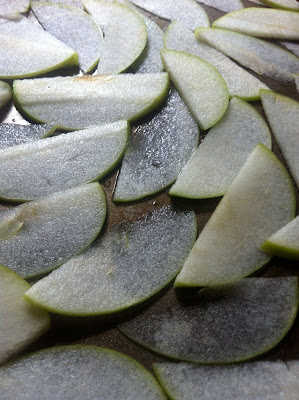 Chunk off a good portion of gorgonzola cheese and chop it up. (unless you do the better topping of berries or peaches... in that case, don't do anything to them, they won't need a thing.) 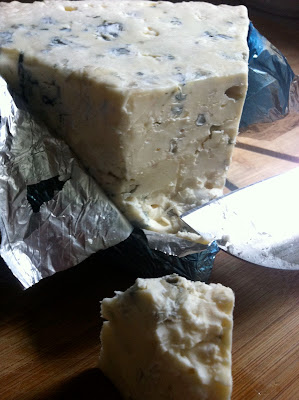 Now let's fill! Pull out your frozen tartlet base. The ones that worked best for me were the cupcake lined ones. The minis. The bigger one's held together, but were much harder to handle.. the base is delicate so the smaller the tart, the faster it's eaten and the easier it is to keep it together because it'll be gone sooner! :) Fill the base with the chilled cashew vanilla 'cream.' 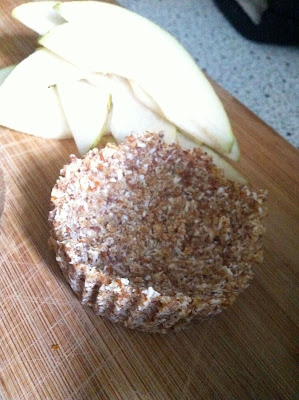 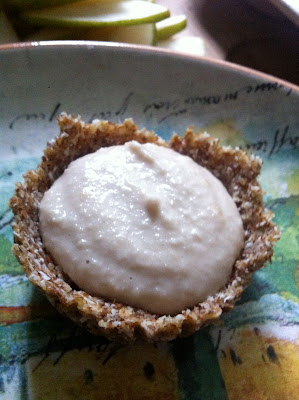 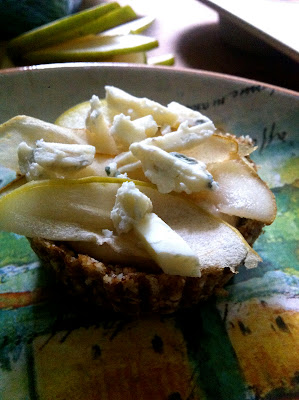 these were just for james and i so i didn't slice the fruit smaller and prettier... but you can imagine how cute they'd be. ESPECIALLY with berries! But hey, it's still pretty adorable. And oh my goodness was it DELICIOUS. The best part? The base. It's like better, healthier version of a graham cracker crust. Next time I make a key lime or lemon pie, I'm not baking my crust, I'll use this.
Anyone have a spring break party they're attending, or an easter brunch? These are the perfect accompaniment to a fresh, spring spread.
Have fun trying this one, friends and let me know how they turn out! Jordan, I'll make these for you this weekend. :)
xox
Posted by sidney at 2:05 PM