Friday Fave or Fail ... Burger Up

I hope everyone is off to a beautiful, sunny weekend... we are here in Nashville and it's been such a nice relief from the cold.

Is it okay to have a Friday Fave AND Fail instead of OR fail? I have an "and" here....

Burger Up is a trendy little joint over in the bustling hot spot known as "12th South" here in Nashville. It's just one of those streets where you know you're gonna get great coffee, great food and feel like you're not missing out one thing because anybody that's doing anything is right here. Cool feel, right? James and I are there all the time, mostly because our church is right there AND of course, so is The Frothy Monkey. (you all know how often i frequent that lovely establishment) Anyways... funnily enough, (by the way, i really don't love using the word 'funnily' but it's the only fitting one sometimes) the owner of Frothy is the owner of Burger Up... she must be doing something right because both places are, count on it, always packed. I'm happy to say I'm a regular, I contribute to the constant bustling feel of these tasty food stops... and last night, we did it again. After a long afternoon of golf in the rain, the only thing that would warm our wet selves was beer and burgers, and we knew just the place!

Walking into this place is like stepping into SoHo on a regular Thursday night, just to find that you've accidently stumbled into the place where all the cool kids come to hang out and make a Thursday feel like the weekend. We had a ten minute wait (to be expected) so we sat at the lengthy, wood paneled and bottle glistening bar... we proceeded to order the same beer we always do there, Franzisakner Weiss. (which was awesome 'til i knocked over half of James' bottle all over him and Kobes... fail) 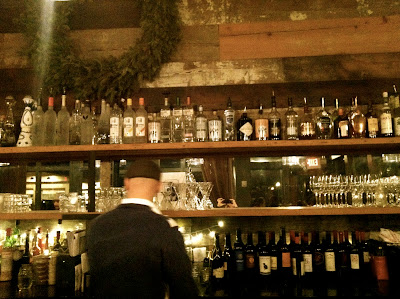 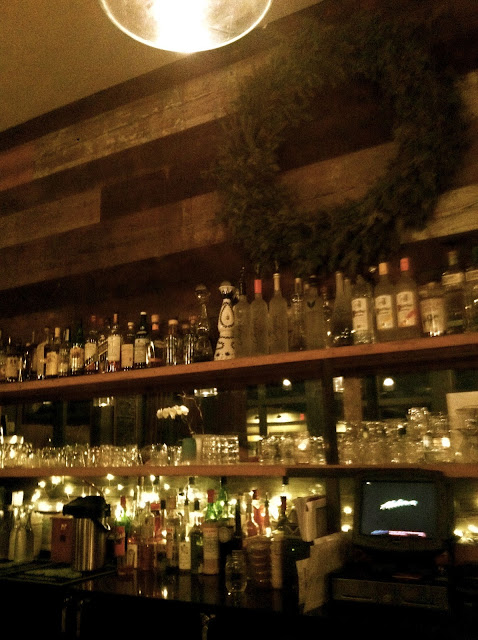 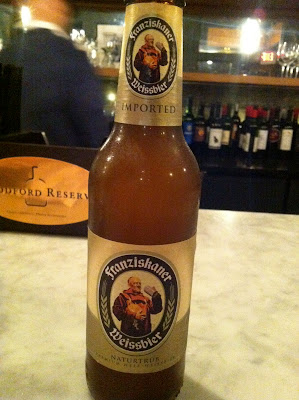 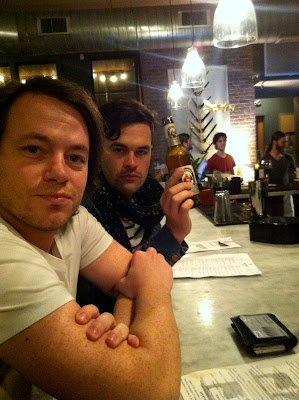 Next, we're seated at one of the five or six massive, lengthy, picnic style tables... some people are a little weird about this concept but, I love it and it makes a lot of sense for turnaround's sake when the place is constantly busy like it is. Besides, who doesn't like meeting new friends rubbing elbows over a good beer? The decor is simple, just votive lit mason jars and flower buckets... the silverware is shiny and old fashioned style, simply laid on top of an old bar towel... and the customers are the likes of young, hip musicians and middle- aged nine to fivers alike. 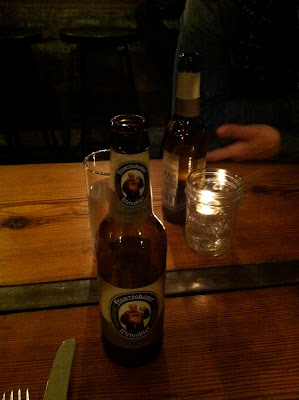 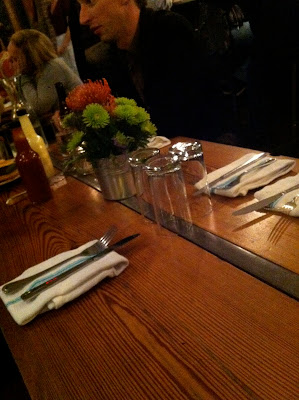 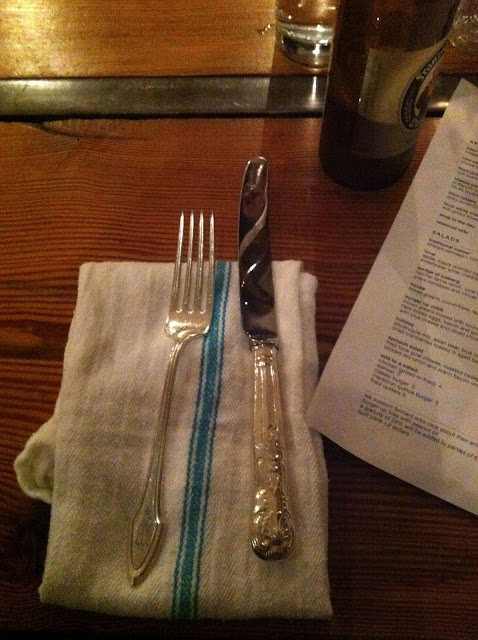 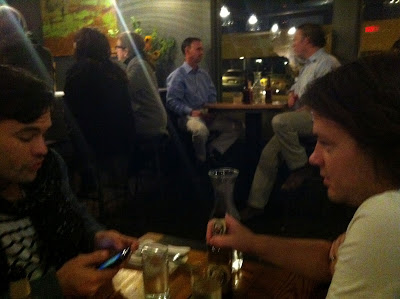 The waitress very promptly and casually approaches us for our order... lots to choose from! (but we all know James is gonna order the same thing he always does... lamb burger... can't help himself) 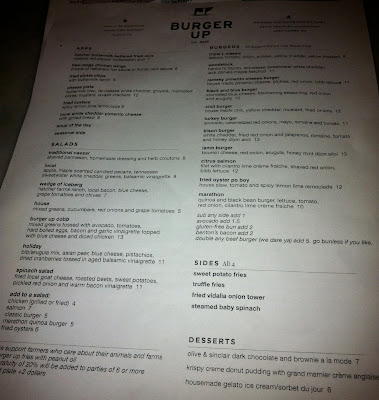 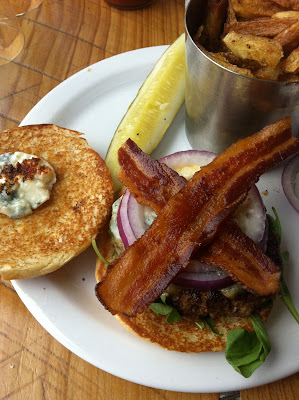 (yes, this was from another day...)
but tonight I decided to be saucy and try the Woodstock... 'white cheddar and bacon' might as well be my middle name. The chefs have apparently come up with their own maple ketchup concoction for this particular burger that the waitress described as a 'must try' so, I went with it. 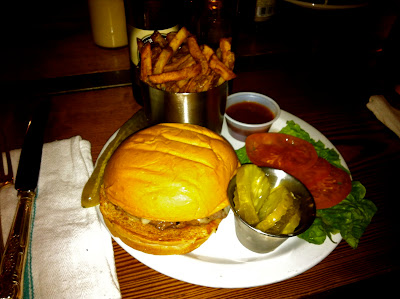 She reluctantly brought me the side garnish of lettuce, tomato and pickles, swearing to me that I didn't need it and I should give it a try all on it's own, just as it comes...... 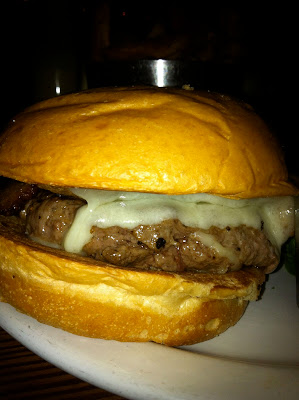 It was pretty tasty but man was it rich! I added the garnish. ;) It needed the tangy 'bite' to break it up. Would I order it again? Yep.
James and Kobes both ordered the lamb burger. They said it was really tasty, but for the price, ($13) it wasn't the best and they expected more. I have to agree with the price issue... considering I'm not in SoHo after all, and the fact that James and I make the best burgers known to man right here at home for roughly $2 per person, $13 for a not-SO- fabulous burger is a little steep. But here's the problem- we continue to pay it. Every time we consider not going, we brush our little dislikes to the side and head over. It IS really great and the atmosphere is so warm, relaxing and somehow invigorating all at the same time... and we like knowing that we're stepping into a little corner of nashville "hang," being part of the local scene. So here's what I can tell you today, folks:
Burger Up is a little bit of a fail in our books, the sole reason being the prices for the quantity... but mostly it's a fave and we highly recommend it, even if just for the experience. I would tell you just to go and have a drink and a good catch up with some friends... but while you're there, you might as well have a burger, too. So go ahead, plan a little get together and take yourself over to 12th South. Plan to pay a little extra, but don't let that stop you. Go. You'll enjoy it, to say the least.
Have the best Friday guys, and if you're looking for a hotspot tonight, go give Burger Up a try, just go a little early, you'll be waiting!
xox
Posted by sidney at 1:47 PM