Hello friends! It's been awhile since I've posted... James and I spent the better part of our day yesterday driving back from Charlotte, and I like to take Sundays as a "no blog day." So let's catch up! How was everyone's Halloween? Anyone see any great costumes? We only had 8 trick-or-treaters... EIGHT! Pathetic. BUT, halloween was still a really great excuse for me to light my new pumpkin spice candles my grandma gave me for my birthday and play the "halloween party" pandora station.. nothin' like a bowl of sparkling candy and B-52's! Now back to the kitchen!

I'd kept seeing this TEMPTING photo of this gorgeous dessert loaf show up on my Pinterest but the time was never right... I can't just make a FABULOUS huge dessert for just James and I because there's no way we would ever finish it all. But lo and behold, the cook-off was going to rally 15 people and they needed dessert... so I went for it! You guys, I told James I think it's officially become the coolest thing I've ever made. It was so fun to make, SO pretty to look at and tasted like a cinnamon-y DREAM! It's a recipe that was adapted, adapted and adapted again from a few sources so I've decided to change it's name as well. Brent said it perfectly when I was asking him what it tasted like... "Pumpkin Babka," and he was absolutely on the money. It's like a fall twist on a classic cinnamon babka and it is to DIE for. Even the folks who don't really enjoy pumpkin (like myself) went crazy over it. There were 15 different palettes trying it so I know SOMEBODY in your life is bound to love it too! :)

1 cup granulated sugar
2 teaspoons ground cinnamon
1/2 teaspoon ground nutmeg (i didn't have any so i did more cinnamon in its place... STILL awesome)
2 Tablespoons unsalted butter

2 Tablespoons unsalted butter (if you only have salted since it's more common, no problem)
1/8 cup brown sugar
1 &1/2 Tablespoons milk
3/4 cup powdered sugar
1 Tablespoon rum (if you don't like rum or don't want to use alcohol, use vanilla extract... but I highly recommend you just go for the gusto!)

In a saucepan over medium-high heat, brown 2 tablespoons of butter, letting it bubble and turn golden but NOT black. 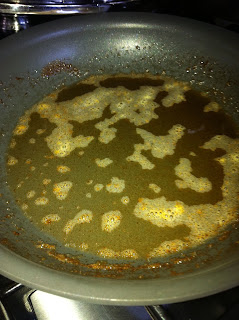 Once that's browned, remove it from the heat and add the milk. Stir! Pour that mixture into a mixing bowl or into the bowl of your standing mixer. (i don't have a standing mixer *gasp* but a regular old hand mixer will do just fine) Let it cool just until it's still warm and then add the yeast and the 1/4 cup of sugar. Let it proof. (what? proof? proofing is simply the term used for letting the yeast soak up the water and sugar) Your mixture should look a little foamy on top and the liquid should now be sort of cloudy. 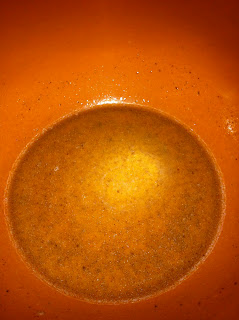 Stir! Now add the pumpkin, salt, and 1 cup of bread flour. Stir until combined and then add the remaining flour 1/2 cup at a time. *your dough should be getting pretty thick and fairly sticky now... that's normal.* Knead the dough with your electric mixer or standing mixer for about 5 minutes. Beware, if you're using an electric mixer, this dough will literally climb itself up the beaters if you're not careful! If your dough is feeling a little too moist and not quite sticky enough, add 1 tablespoon of bread flour more at a time and knead it in with your hands. 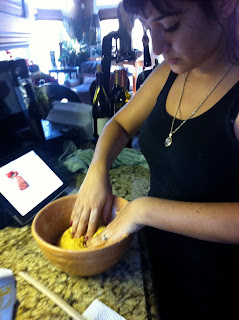 Place the dough into a new bowl that's been lightly oiled and cover it with a clean kitchen towel. Allow to rise in a warm place (i put mine in the oven.. not turned on of course) for 60-90 minutes (mine only took an hour) or until about doubled in size. 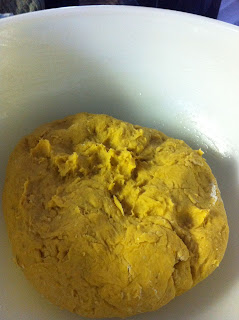 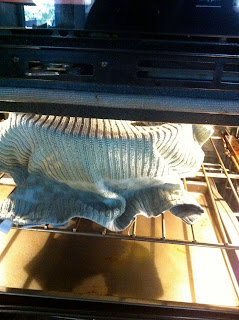 While the dough is rising, brown the other 2 tablespoons of butter, then add the sugar, cinnamon and nutmeg and mix really well... you want to make sure the sugars evenly absorb the butter. You'll use this mixture when the dough is done rising so for now, set it aside. 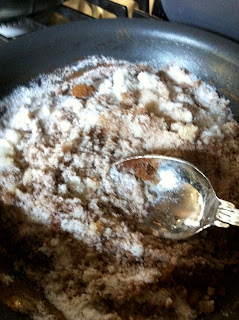 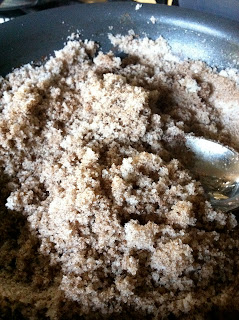 Grease and lightly flour a 9x5 loaf pan. (i didn't lightly flour mine and i kind of wish i had.. it came out perfectly but i did want to invert it on a pretty serving plate and i couldn't because it would've fallen apart) 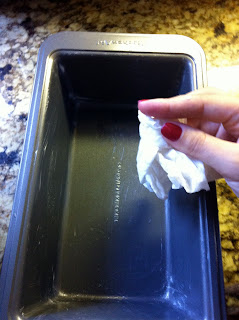 NOW, when your dough has doubled in size, punch it down and flop it onto a clean floured surface, like a pastry cloth. Roll dough into a 20x12 inch rectangle... when I first saw this step I was like, "oh no way.. i quit, this is too detailed." But then I got my wits about me and pulled out the tape measurer... SUPER easy! Don't quit now, you've come so far and it's SO worth it! Trust me. 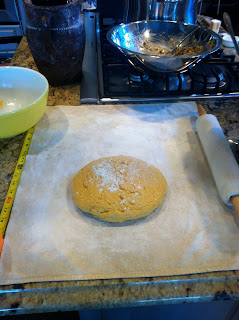 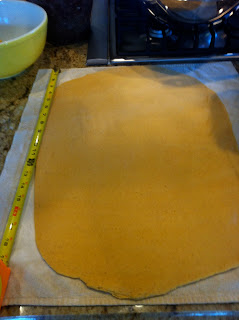 Now take that buttery sugary mixture you just made on the stove and sprinkle it ALL over the entire giant piece of dough. Then press it in, not hard, but with the palm of your hand, just press firmly until it's all pressed in nicely. 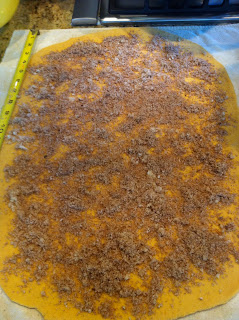 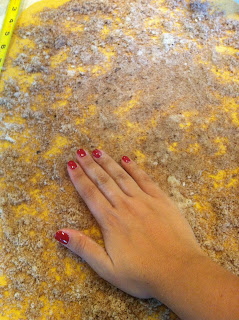 Now cut the dough into 6 vertical strips. The recipe I was following didn't quite explain this well so for all of you visual people and elementary school teachers.. we're going for HOT DOG style, NOT hamburger style. ;) Now carefully lay the strips one on top of the other into a big stack. (the dough will be a little sticky but shouldn't break, don't be rough with it but don't be afraid to grab it either, a little stretching is normal, won't hurt anything) 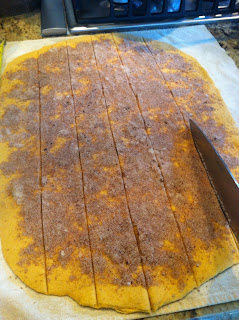 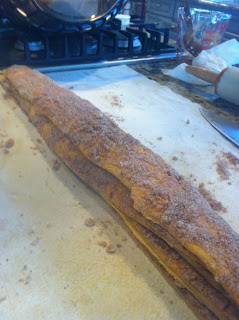 Cut the stack in half, and then cut each half into thirds so that each strip is now made of 6 squares. (or do it the hard way like i did and guess) Now all you do is grab the stack of squares and load them vertically into the pan! (some of them may not be wide enough to reach either side of the pan and that's ok) Cover the pan again with a clean towel and let rise for another 30-45 minutes. While that's rising, preheat your oven to 350 degrees. 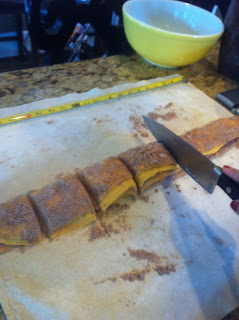 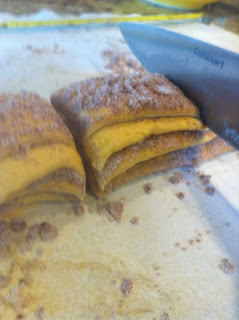 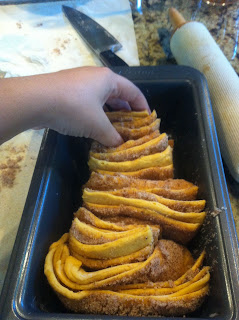 Now bake the loaf for 30-40 minutes or until the top is golden... mine took 35 minutes. Just WAIT till you see how gorgeous this thing is fresh outta the oven! 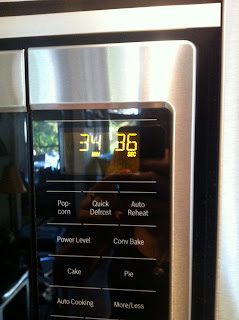 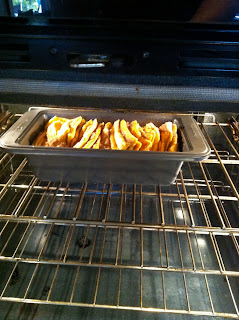 Now while that's getting SLIGHTLY cooler, let's make the glaze. Heat the butter, milk and brown sugar in a small saucepan. Bring it to a boil then remove it from the heat quickly. Stir in the powdered sugar and rum! 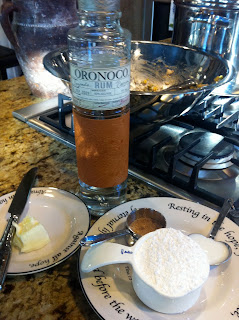 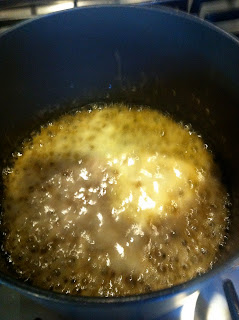 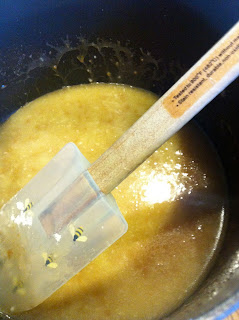 While the loaf is still warm, drizzle that sinfully delicious glaze all over the entire loaf- you'll want it in the middle, on the top and on the sides... don't be afraid of it 'pooling' on the sides! And there you have it... I recommend a hot pot of coffee and a few friends to go with this, you'll need them! 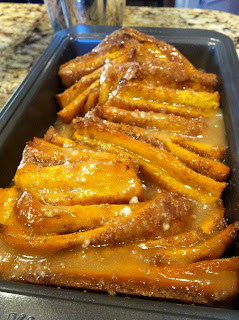 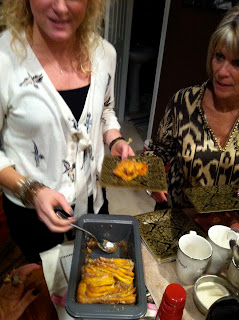 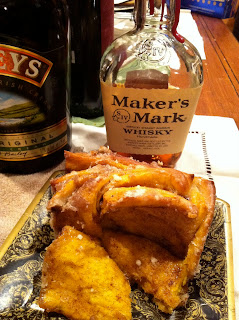 IT WAS A TOTAL HIT! I mean, LOOK at that stuff! I'm telling you, give it a try, you will NOT be sorry. Now, I will be TOTALLY impressed if one of you wonderful people goes for this and sends me some gorgeous photos! Who's going to be the first to make us all drool?
LOTS OF LOVE, you guys!
Posted by sidney at 5:10 PM